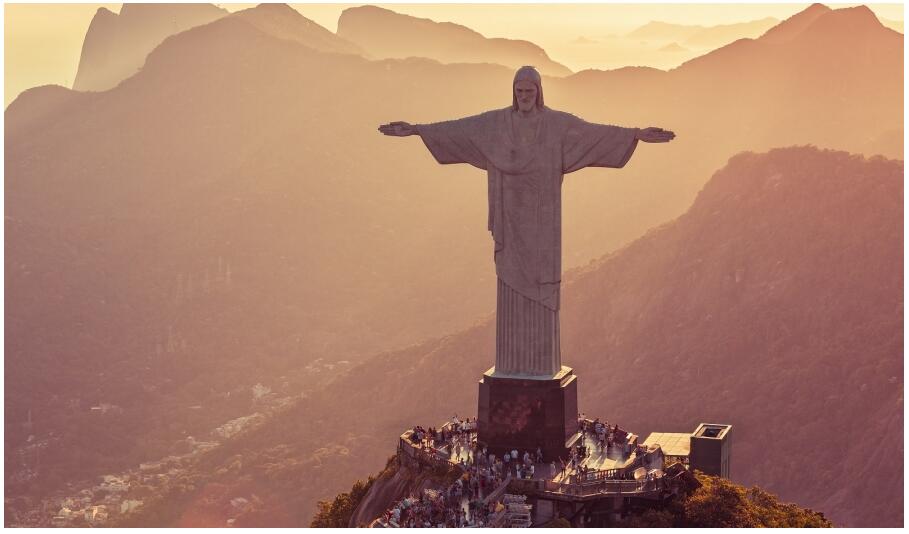 With more than 13 million inhabitants, Rio de Janeiro is one of the largest cities on earth. A mixture of pulsating city life and a beautiful natural landscape with sandy beaches, bays and granite hills makes the city a dream destination for many vacationers.

The Sugar Loaf and Corcovado with its Christ statue are the most famous granite hills in the Brazilian metropolis. The splendid carnival is an exciting spectacle every year and football fans have experienced historic battles on the green lawn here.

The secret capital of Brazil also repeatedly serves as a location for famous films. “James Bond 007 – Moonraker” (1979) is just as much a part of these blockbusters as “Fast & Furious 5” or the first part of the vampire saga “Breaking Dawn”.

Below we present you the most exciting tours, most beautiful attractions and best sights in Rio de Janeiro. 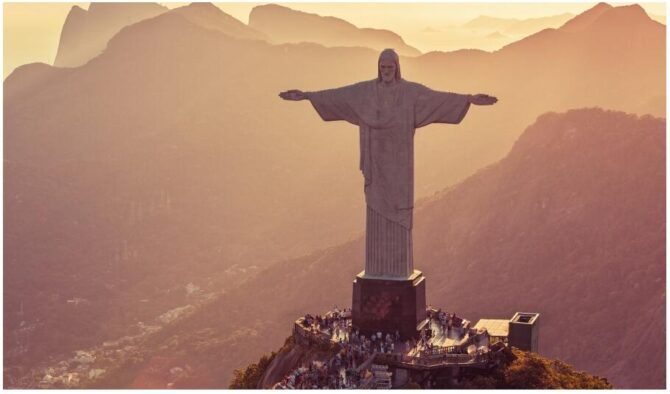 The 396 meter high Glockenberg was created by shell-like flaking on the Urca peninsula. Its shape is reminiscent of a sugar loaf, which gives it its name. The rock made of gneiss-like granite was climbed for the first time in 1817. Today a fully glazed cable car leads up in two sections to one of the most important sights in Rio de Janeiro. The first section ends after 226 meters.

In addition to a theater for more than 1000 people, there are various restaurants and even a disco. A few steps lead to the second mountain station, from where the journey to the Sugar Loaf continues. Once at the top, viewing platforms invite visitors to enjoy a sensational view of the Atlantic, bays and beaches. Paths lead through a small bamboo forest and souvenirs and souvenirs await in souvenir kiosks.

2. Corcovado – home of the famous statue of Christ

With outstretched arms, Cristo Redentor (Christ the Redeemer) rises up on Corcovado Mountain. The statue, built in Art Deco style, houses a chapel in its eight-meter-high base. Your gaze is fixed on the Sugar Loaf. The summit can be easily reached with a cogwheel train.

The viewing platform offers a view of Rio de Janeiro, Corcovado National Park, Copacabana and the historic Maracanã football stadium. It is one of the largest Christ statues in the world. Many other statues were built based on their model. Including Cristo Rei from Almada south of Lisbon.

Probably the most famous district of Rio is in the Zona Sul: Copacabana. The part of the city located between the granite rocks populated with favelas and the Atlantic Ocean became famous for the four-kilometer-long sandy beach, which in itself is the most visited attraction in Rio de Janeiro. There are numerous opportunities for strolling and shopping around Avenida Nossa Senhora de Copacabana and Rua Santa Clara.

But whoever comes here wants to enjoy the beach life above all else. Here the vacationer feels the Brazilian way of life with a mojito or caipirinha. Sports enthusiasts have numerous opportunities for water sports and when they meet friendly Brazilians or take a stroll through the surrounding streets, tourists get to know the diversity of the country’s different cultures.

4. Estádio do Maracanã – a must for football fans

The Maracanã Stadium was once the largest football stadium in the world. When it was completed for the football World Cup in Brazil in 1950, it offered space for 200,000 football enthusiasts. Through various modernization measures over the years, the capacity has shrunk to 74,738 spectators today. But the venue, which is also used for concerts, has lost none of its fascination. The stadium was the scene of major battles at major sporting events such as the 1989 Copa America or the 2016 Summer Olympics.

Since July 13, 2014 at the latest, Maracanã has been a must for every fan of the German national soccer team when visiting Rio de Janeiro. At that time, Mario Götze shot the team around captain Philipp Lahm in a thrilling final against superstar Lionel Messi and his Argentinians to the world championship title. On various sightseeing tours, visitors can take a look behind the scenes, see where their heroes have changed and sometimes even step onto the sacred lawn.

Praça Floriano Peixoto is the official name of this large public square located in the center of the city. However, it is popular under the name Cinelândia. The Avenida Rio Branco runs right through the old city center. A large number of important public buildings were erected across from the square.

Among them is the Theatro Municipal, which is one of the most important and magnificent theaters in Brazil. In front of the city theater there is a bronze statue of the composer Carlos Gomes. The center of the square is decorated with a monument to Floriano Peixoto, once President of the Republic. Bars, nice cafes and cinemas provide entertainment options around Cinelândia. 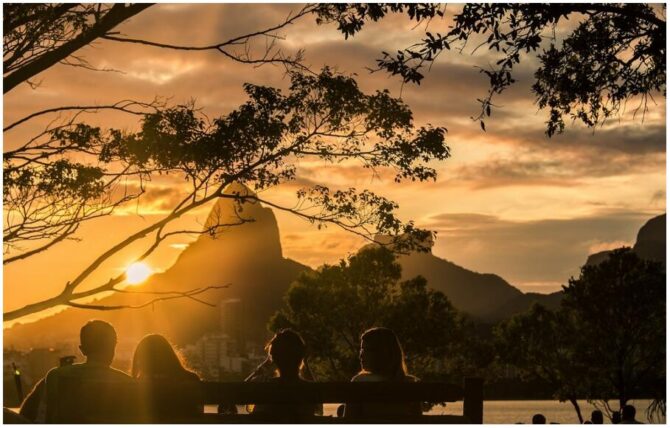 If you see the cathedral of Rio de Janeiro, you will feel more reminiscent of the pyramids in Egypt. From a purely visual point of view, it has nothing in common with a typical church. Incidentally, this also applies to their insides. Indeed, it was designed by Edgar de Oliveira da Fonseca based on the Mayan pyramid style. The 75 meter high building can accommodate 20,000 people. Scenes from the Bible are shown on 48 bronze panels at the entrance portal. Pompous jewelry cannot be found.

A simple altar made of granite and four impressive windows made of colored glass, on the other hand, provide highlights. Another eye-catcher is the huge glass cross. There is also a museum of sacred art in the basement of the cathedral. Completed in 1979, the cathedral is now the seat of the Archbishop of Rio.

Declared a Biosphere Reserve by UNESCO, the Botanical Garden of Rio de Janeiro is one of the most important of its kind in the world. A good 6500 species can be found on an area of ​​around 140 hectares. These include some plant species that are threatened with extinction.

The main avenue, Barbosa Rodrigues, is lined by 128 royal palms, some of which date from the time the garden was created. The main attraction of the garden is a lake in which, among other things, the largest water lily in the Amazon can be admired. Furthermore, rose gardens, orchidariums and greenhouses await the visitor.

The lush green and tropical Tijuca forests are also a national park and represent the world’s largest urban forest. In the natural pools you can enjoy a wonderfully refreshing swim at one of the beautiful waterfalls. Incidentally, Corcovado is also part of this national park, which is located outside the city center and can be reached by bus.

Plants and animals of the biosphere reserve can be explored on many hiking trails. The flora includes, for example, coffee, breadfruit and mango. The animal inhabitants include snakes, insects, spiders, coatis and lizards.

Ipanema Beach is the city’s most important beach alongside Copacabana. The directly adjoining district is one of the more upscale districts. Ipanema is located on an extensive bay. You can soak up a unique atmosphere here on deck chairs under colorful parasols.

If a beach vendor is selling iced acai, a connoisseur shouldn’t say no. The mush from the acai berries of South America is refined with sweet condensed milk, peanuts and granola. On the rock Arpoador Rock, which lies between Copacabana and Ipanema, sunset fans experience a breathtaking sunset.

10. Escadaria Selarón – work of art made of tiles

The artist Jorge Selaròn created the motley work on the more than 200 steps that lead below the stairs in the district of Lapa up to the artists’ quarter of Santa Theresa. Tiles from more than 60 countries were installed in loving detail. Back then, everyone had the opportunity to donate their tiles to the artist. With a little luck he could later find it as part of a colorful work of art.

Today the project has become one of the most photographed sights in Rio de Janeiro. Among other things, strollers will discover tile motifs by Speedy Gonzales or the Simpsons here. The total number is more than 2000 tiles. Selaròn hand-painted 300 of them with the motif of a pregnant African woman. 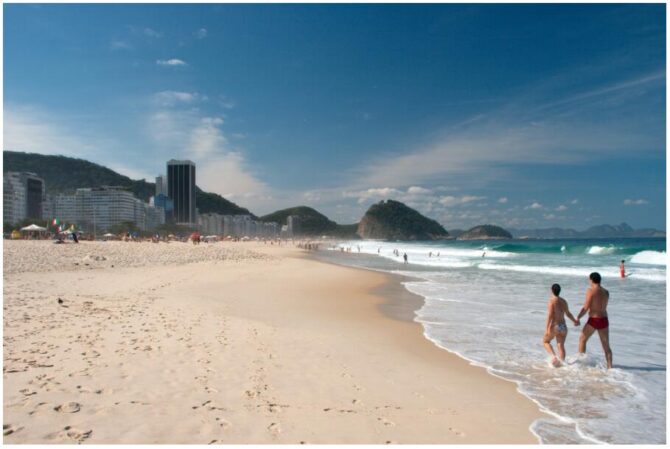