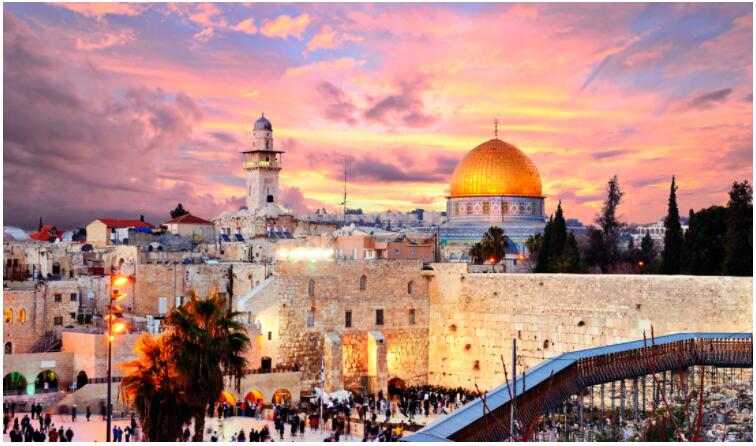 Israel offers diversity and a wealth of variety like no other! Here you will find everything from fertile valleys, plains, mountain areas and deserts. Here, on historic land, are numerous Jewish, Christian and Muslim memorials. Israel has a strong international character and a large part of the population has come here from all over the world. Join a tour of Israel during which you will get an insight into the modern state of Israel and experience places such as Nazareth, the Golan Heights and the Dead Sea. We also visit Bethlehem and Jericho on Palestinian territory. During the trip we get acquainted with places mentioned in the Bible but also get to see relics from Roman times. Towards the end of the journey we experience Jerusalem where we feel the wings of history in the Old City. 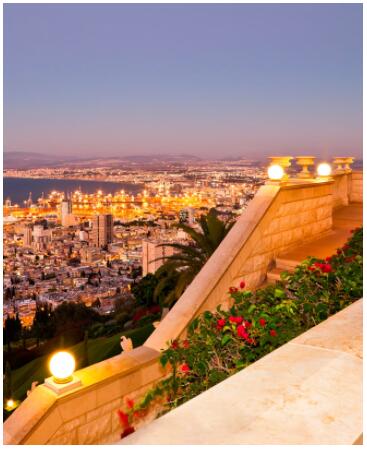 Day 1: Travel to Israel (Tel Aviv)
After arriving in Tel Aviv, we are met by our local representative and headed to our hotel. Overnight in Tel Aviv.

Day 2: Tel Aviv – Jaffa – Caesarea – Haifa – Acre – Lake of Gennesaret
After breakfast we travel to the historic port city of Jaffa. The city was inhabited as early as 7,500 BC and the harbor has been used since the Bronze Age. From a vantage point we get a nice view of the city and then take a walk in the beautiful alleys of the old town. We travel further along the coast to the world heritage Caesarea Maritima with its well-preserved harbor and amphitheater from antiquity. We continue to Haifa where we do a city tour that begins with a visit to Mount Carmelfrom where we get a fantastic view of the neighborhoods. Then we see i.a. The Bahai Shrine with its beautiful Persian garden. The journey continues towards the city of Acre (Akko), the oldest part of which, built on a narrow headland, has been designated a World Heritage Site. Here you will find an ancient city wall, beautiful architecture and exciting bazaars. In the afternoon we head towards the Sea of ​​Galilee . Overnight in Tiberias. (Breakfast and dinner.)

Day 3: Lake of Gennesaret – Golan Heights
After a short city tour of Tiberias, named after Emperor Tiberius, a boat trip to Capernaum on the northern shore of Gennesaret awaits . Here we see, among other things, the ruins of a synagogue from the 100s. In the nearby Tabgha we visit the church, which marks the place where Jesus is said to have fed 5,000 people with five loaves and two fish. At the Mount of Beatitudes , we visit the place where Jesus, according to tradition, gave his Sermon on the Mount. We continue towards the Golan Heights , the plateau that was conquered by Israel during the Six Day War in 1967. We visit the Golan Winery winery and get a tour with tastings. We end the day by visiting the place by the Jordan River where Jesus was traditionally baptized by John the Baptist . Overnight at the Sea of ​​Galilee. (Breakfast and dinner.)

Day 4: Lake of Gennesaret – Nazareth – Dead Sea
After breakfast we travel to Nazareth. On the way we pass the village Kafr Kanna (Kana),where, according to the Bible, Jesus performed his first miracle by turning water into wine. In Nazareth we visit the Annunciation Church and the well of St. Mary . We continue along the fertile Jordan Valley with its fruit and vegetable plantations. Agriculture has been practiced here since prehistoric times. In Beit Shean we visit the extensive archeological excavations of the Hellenic-Roman city of Scythopolis. In the afternoon we reach the Dead Sea which is about 400 meters below sea level and thus constitutes the lowest point on earth’s surface. Here you can get a unique experience by floating on the water. The high salinity makes you float like a cork in the water! Overnight at the Dead Sea. (Breakfast and dinner.)

Day 5: Dead Sea – Masada – Ein Gedi – Qumran – Jerusalem
After breakfast we visit the impressive fortress Masada , located on a 400 meter high plateau mountain in the Negev desert. The world heritage dates back to the 100s BC. Then we travel to Qumran , where in 1947 the so-called Dead Sea Scrolls were found – a total of 900 larger and smaller fragments of manuscripts from the Old Testament Bible books. The texts, which were probably written down about 2000 years ago, have played a major role in the research fields of history, religious studies and linguistics. We continue via the scenic Moab Mountains to the city of Jericho, which is one of the world’s oldest still inhabited cities. In the afternoon we arriveJerusalem where we check in at our hotel. Overnight in Jerusalem (Breakfast and dinner.)

Day 6: Jerusalem
After breakfast we head to the Mount of Olives from where you get a fantastic view of the Old City of Jerusalem. We continue along Palmsöndagsvägen to the Garden of Gethsemane and the Church of All Nations . Then we go to Mount Zion and visit the tomb of King David and the place where Jesus’ last meal is said to have taken place . We continue into the Jewish quarter of the Old City for a walk to the Western Wall (the Wailing Wall) under which we can see the Temple Mount, the Rock Dome and the al-Aqsa Mosque . Then we walk further along Via Dolorosa (“Path of Pain”) which is said to be the path which Jesus walked with the cross to Calvary. We arrive at the Church of the Resurrection (Church of the Holy Sepulcher) which is located on the supposed site of Jesus’ crucifixion. Here is also the tomb from which Jesus is said to have risen from the dead. Overnight in Jerusalem (Breakfast and dinner.)

Day 7: Jerusalem – Bethlehem
After breakfast we go to Bethlehem where we visit the Church of the Nativity, which according to tradition is located at the place where Jesus was born. Just outside the city we also visit Beit Sahour . We then continue to the Yad Vashem monument to the victims of the Holocaust. During the day we also experience the Machne Yehuda market, where you have the opportunity to buy locally produced delicacies and much more. There are also many pubs and restaurants in the area. Overnight in Jerusalem. (Breakfast and dinner.)

Day 8: Jerusalem
Today is free time to explore Jerusalem on your own. Ask your tour guide for information on museum visits, tourist attractions or shopping. In the evening transfer to the airport and return trip. (Breakfast)

Day 9: Return from Tel Aviv
We return to the boarding place. 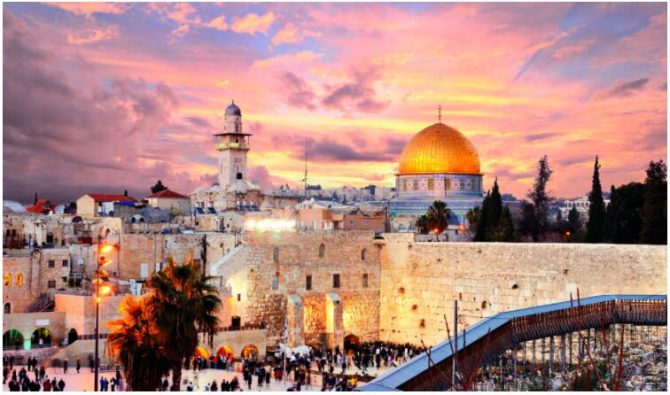