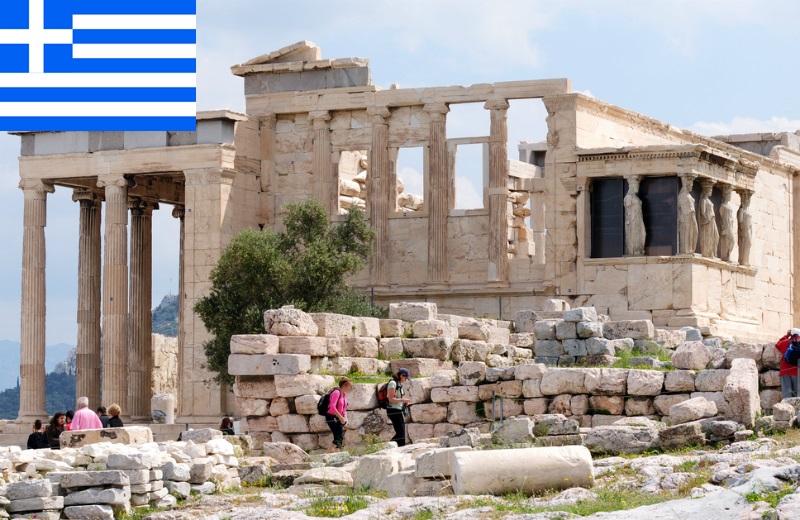 Greece is a country located in the region of Southern Europe. Greek politics is still characterized by the economic crisis, which was deepest during the first half of the 2010s and began to ebb only towards the end of the decade, when the emergency loans to the country could be terminated. The crisis has had major social, humanitarian and economic consequences for the population, in the form of soaring unemployment, impaired welfare and social concerns. In July 2019, dissatisfaction among voters led to conservative New Democracy taking power after the left alliance Syriza.

When the Syriza Left Party won the parliamentary elections in January 2015, the Greek people had lived through six years of economic depression and social decline. The strong popular dissatisfaction with social development meant that Syriza almost got its own majority in the legislative assembly. Syriza’s leader Alexis Tsipras was named prime minister for a government consisting of Syriza and the Nationalist Rightist Independent Greeks. For the first time in 40 years, the two traditionally dominant parties – Pasok and New Democracy – fell outside the government.

The various governments that succeeded each other in Greece since the economic crisis erupted in 2009 (see Modern History) have put great effort into negotiating as reasonable terms as possible for the three rescue packages (aid loans) they were forced to take from the EU, ECB (European the central bank) and the IMF (International Monetary Fund). The new government also had the highest priority to negotiate lighter loan terms and regular debt write-offs. The government promised to restore wages and pensions to the levels that prevailed before the crisis. Another stated goal was to create new jobs because around a quarter of the workforce had lost their jobs since the start of the crisis.

The government’s ambitions were largely to shame. Like previous governments, it was forced to agree on welfare cuts and other budget cuts. Although the Syriza government began its term of office in trying to put tough ultimatum to the lenders in the many rounds of negotiations that preceded loan payments and entered into emergency loan agreements, the end result was that Tsipras and his government entered into agreements for greater savings than ever. The reason was Greece’s poor negotiating position. With a sovereign debt that was described by the IMF as an unreasonable and liquidity shortage in both the state and the banking system, Greece was in desperate need of a loan. 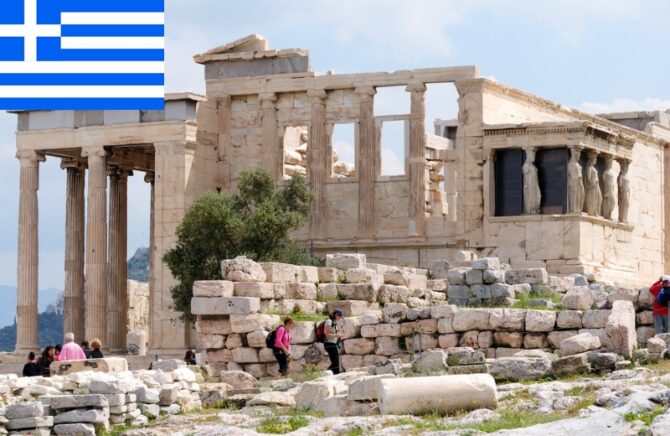 When Greece accepted the requirements for its third support loan in August 2015, despite the fact that the voters had just before the majority voted against the loan terms in a referendum.

When the support loan was in port, the government chose to try to get its policy approved through a new election announced in September. Much to the surprise of many, Syriza received almost as much voter support as in the January elections, and Tsipras once again formed a government with Independent Greeks. It was clear that Tsipras – despite criticism of failed election promises and excessive concessions to lenders – was still regarded as a person outside of the old political elite, which has long been tarnished by corruption deals and frugal politics.

Parallel to the debt crisis and economic depression, Greece has been forced to deal with an extensive influx of refugees through the country, from Asia and the Middle East, via Turkey and Greece, and further to EU countries west and north. Greece has been criticized by the EU and UNHCR for tens of thousands of people being held in asylum and shelter camps under unworthy conditions and almost entirely without legal or medical assistance. Racially motivated violence against refugees and immigrants has occurred as well as unrest between anti-racists and immigrants on the one hand, and neo-Nazis and immigrant opponents on the other.

After the refugee stream reached its peak in October 2015, when around 7,000 migrants a day made their way to Greece, the EU and Turkey negotiated in March 2016 an agreement that in broad terms meant that the EU could return the refugees to Turkey for compensation (see further Calendar). In the same month, the European Commission allocated EUR 700 million to Greece with several countries to assist in the management of the refugees for three years. It was the first time the EU provided humanitarian aid to its own member states.

The agreement with Turkey soon received sharp criticism from UNHCR and human rights organizations. The reason was that both the EU’s distribution of refugees within the Union and the rejection of refugees to Turkey worked poorly. Reports came about violence outbreaks, sexual abuse and gang crime inside the camps. But despite the circumstances, people continued to make their way to Greece every day.

In 2017, despite street protests and strikes, Syriza pushed through new economic tightening packages and privatizations, including ports and airports. During the summer and autumn, signs emerged that the country was emerging from the deepest crisis, with a chance to regain some small economic growth.

In August 2018, EU financial aid was formally terminated from the EU to Greece. Greece was back on its own feet and could borrow at market rates, but it was expected to take many years before the economy recovered and large debts were paid.

In early 2019, the political debate began to become fiercer and the tone between Syriza and the right-wing opposition was screwed up. An important reason was the choices that would take place during the year. In May, local elections would be held at the same time as elections to the European Parliament and by October, elections must be held for the national parliament.

The political contradictions had already intensified in the summer of 2018 when an agreement was concluded that would end the protracted conflict over the name of Macedonia with the neighboring country in the north (see Foreign Policy and Defense). According to the so-called Prespa agreement, Greece recognized Macedonia under the name of Northern Macedonia. In protest of the agreement, Defense Minister Panos Kammenos, party leader of Independent Greeks, chose to leave government cooperation with Syriza. However, some of the independent Greek ministers remained in the government. The opposition demanded new elections, which made Prime Minister Tsipras feel compelled to request a vote of confidence in Parliament. He won by a slight margin. After that, Tsipras also elected to present the Prespa agreement in Parliament, which approved the agreement with 153 out of 300 votes.

However, the agreement has continued to be controversial among voters, which has contributed to Syriza’s weak support in opinion polls. In early 2019, after four years in power, Syriza was far behind the New Democracy opposition party. Tsipras, however, hoped that the Greek economy’s recent development would help him regain voter confidence in the upcoming elections. In 2018, economic growth was the highest in ten years and high unemployment was on the decline. In the spring of 2019, the minimum wage was raised by 11 percent and the government announced tax cuts on food, energy, restaurant and hotel visits and an extra contribution to poor pensioners. The right-wing opposition accused Tsipras of trying to buy votes and New Democratic leader Kyriakos Mitsotakis promised to take the country out of the crisis through deregulation of the economy,

Mitsotaki’s message went to the voters. All elections were a disappointment for Syriza and a triumph for New democracy. Syriza lost big, both in the European elections and in the local elections held at the same time.

The day after the European elections, Tsipra announced his election to Parliament on July 7, 2019. Again this time, New Democracy won a superior victory. The party received almost 40 percent of the vote and its own majority (the winning party is allocated 50 extra seats). Syriza came in second with just over 33 percent. In terms of the mandate distribution, the roles were largely reversed compared to the September 2015 election (compare fact box and Calendar).

New Democratic leader Kyriakos Mitsotakis succeeded Tsipras as head of government the day after the election.

The new right-wing government pushed through economic policy changes only after a few months in power. The aim was for Greece to leave behind the years of austerity policy and economic crisis. Parliament approved a reduction of the unpopular property tax by 22 percent, while a further reduction was planned in 2020. In addition, a special body was set up to promote transparency in state administration and fight corruption. Mitsotakis also changed the government’s organization and the distribution of ministers to make the work more efficient and reduce the bureaucracy.

The government also made efforts to overcome the continuing migration problems in the country as the number of migrants increased. In 2019, migrant flows increased again to Greece. According to the UN refugee agency UNHCR, over 14,000 refugees and migrants arrived via Turkey via the border, while just over 55,000 arrived at sea. A total of about 70,000 refugees and migrants were estimated to be in the country, many of whom lived under difficult conditions in the Greek island world. The slow preparation of asylum cases helped to make the problems more difficult. The Mitsotaki government sought support from the European Commission and other EU countries, while increasing border surveillance and trying to speed up the rejection of migrants who were not deemed to be entitled to asylum.

In November 2019, the rules for asylum were tightened. It was also announced that three overcrowded camps on the islands of Lesbos, Chios and Samos would be closed. Instead, new large well-guarded camps would be built with a capacity for at least 5,000 people, but these would no longer have the right to move freely but would be closed pending their asylum cases had been processed. The plans received harsh criticism from human rights organizations. The Council of Europe’s Commissioner for Human Rights Dunja Mijatovic said that the new asylum law would lead to violations of migrants’ rights.

In March 2020, the new corona virus, which first appeared in China in late 2019, began to spread in Greece as well. Once a few hundred cases of the virus had been registered, the government imposed strict restrictions to prevent the spread of infection. Airports and ports were closed, as were shops, schools and large sections of the community and the population was ordered to stay at home.

A couple of months later, the government gradually began to lift restrictions and reopen society. The country then seemed to have escaped mildly compared to many other countries. Only 180 people had died of the covid-19 disease caused by the coronavirus in early June. From the middle of the month, tourism would start again and airports open to travelers from many countries. For the Greek economy, which has not yet recovered from the debt crisis in the early 2010s, it was necessary to get the important tourism industry back on track. Unemployment had risen as a result of the pandemic and the government had promised a € 24 billion support package, including EU grants, to boost the economy.

57% in the July 2019 parliamentary elections