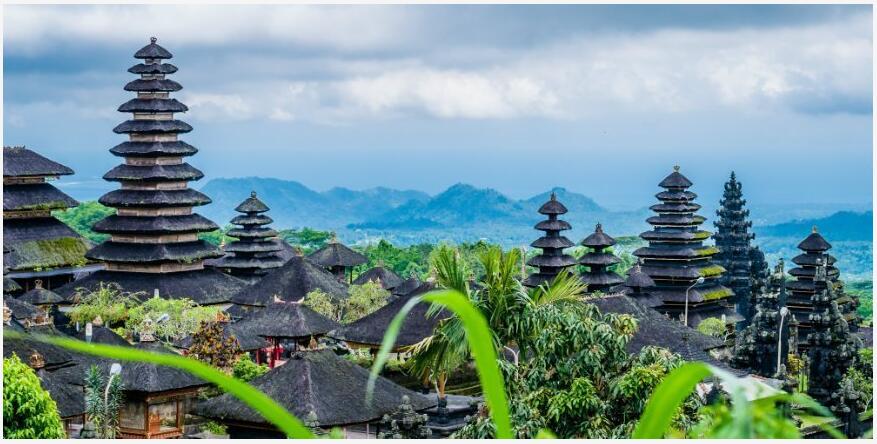 It is said that a beloved child has many names. And in Bali there are enough of them!

And the names are deserved, as Bali has over 10,000 temples or shrines, each unique.

But what is the significance of temples and religion to Balinese? 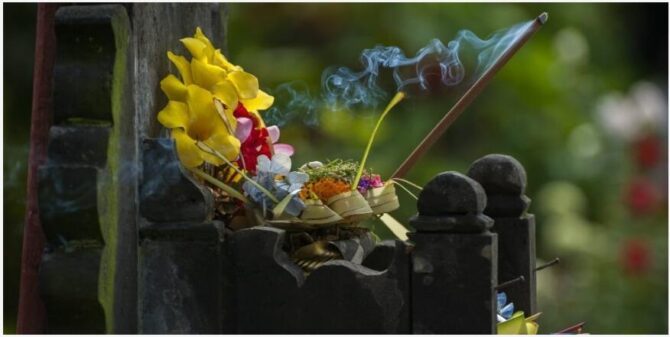 The main religion of Bali is Hinduism. Balinese Hinduism is characterized by belief in the power of nature, the worship of ancestors, and the impact of spirits on people’s lives.

The Balinese give sacrificial gifts to ancestors and spirits and build shrines or temples for them to live in.

In the Bali language, the temple is dismantled. The name is Sanskrit and means “a place surrounded by walls”.

There are many different types of bites on the island.

Pura Puseh is a type of temple that is common in rural villages in Bali. The temple is dedicated to the ancestors of the villagers.

The villages also have temples dedicated to the official festivities of the village. This type of temple is called Pura Desa .

The temples of death are called Pura Dalem . This type of temple is dedicated to the death of the gods.

Each Balinese family has their own little temple dedicated to their ancestors. The villagers also have common temples for public occasions.

Temples form an important part of Balinese religious culture, as temples give sacrificial gifts to ancestors and spirits. Balinese Hinduism is known for its countless rituals, and rituals are a significant part of everyday life.

Five temples worth visiting in Bali

A visit to one or more temples is rightly part of the travel program of every Bali visitor. Visiting the temple gives a good idea of ​​the Balinese way of life and what the locals find important.

We’ve put together below suggestions for shrines you can visit while traveling to the island of thousands of temples . 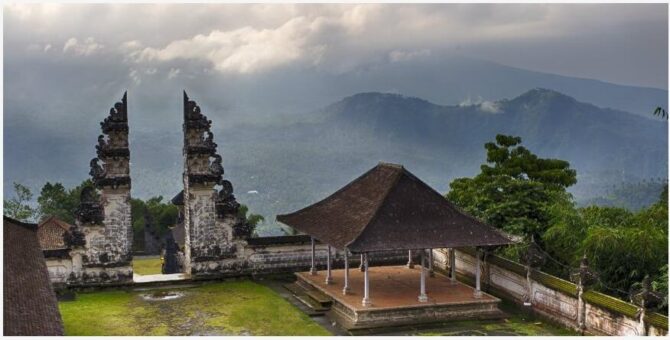 The magnificent Pura Besaki Temple Complex is located at an altitude of 900 meters on a picturesque mountainside. A spectacular sight awaits those climbing the slopes of St. Agung Volcano.

The huge temple is the most important shrine in all of Bali. Besakih is also called the Mother Temple, and is the central temple of Balinese Hinduism.

Pura Besakih consists of several temples, the largest and most important of which is Pura Penataran Agung. The temple is built on a hillside on six levels, and the entrance to the temple is decorated with a stone gate (Candi Betar). In the courtyard of the temple is the lotus throne, a three-sided shrine dedicated to Brahma, Vishnu and Shiva. During the festivals, the shrine is decorated with colorful clothes that symbolize the gods.

Many areas of the temple complex are open to tourists, but in some places tourists are limited to just peeking inside. 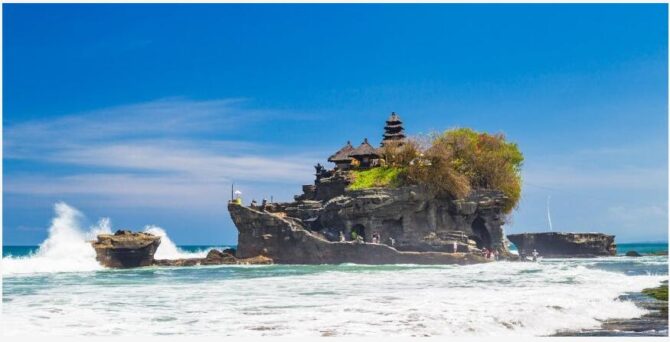 As you approach the Tanah Lot Temple, you can hardly believe your eyes. From the sea rises a majestic rock island, on the top of which stands the temple. As the day turns into evening, the sun colors the temple in fascinating tones and the building gets a magical look.

Tanah Lot is the most popular temple in Bali in terms of number of visitors. In addition to the unique nature, the history of the sanctuary is interesting.

According to legend, the Hindu priest Dang Hyang Nirartha proposed building a temple in the 16th century. The temple has since played a significant role in the Balinese religion and religious architecture. 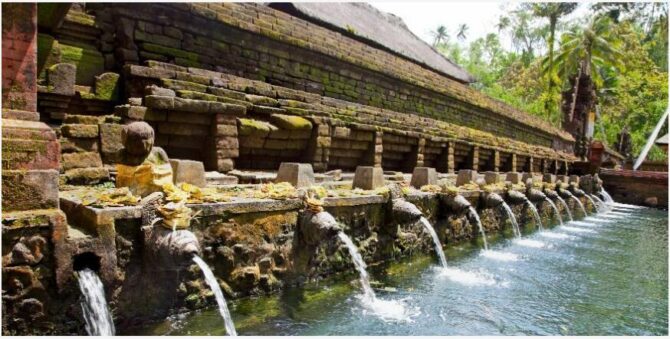 When you arrive at the Tirta Empul Temple, you will be the first to notice the many pilgrims standing in the water with their clothes on. They practice a cleansing ritual of washing in water flowing from “taps” carved from stone. There are 30 taps, and for each tap you stop for a moment, running from left to right.

The two purification pools of the temple are located in the square called Jaba Tengah, which is the most significant place in the whole temple.

Tirta Empul is one of the most important temples in Bali because believing Hindus use the holy water of the temple in their cleansing rituals.

The name of the temple dedicated to the water god Vishnu is Bali and means sacred source.

A modern house was built on the hill next to the temple in the 1950s to honor the visit of Indonesia’s first president. 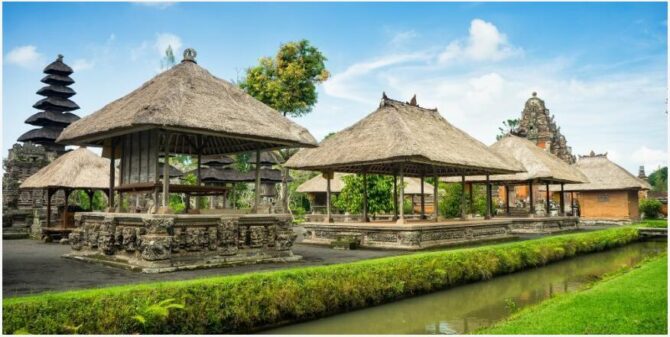 Pura Taman Ayun is a royal water temple built in 1634 with an unspoiled silence and peace in the area.

The temple is surrounded by a moat, so access is only possible via a bridge over the water.

The temple consists of two courtyards. One of the courtyards is large and open, while the other has several smaller temples.

The temple area is characterized by green trees, calm ponds and small thatched temples. The shrine is also named after the greenery, as Taman Ayun means beautiful garden.

Unfortunately, the temples are not accessible. However, the temple area has many small marshes where you can retreat to enjoy the silence and picturesque scenery. 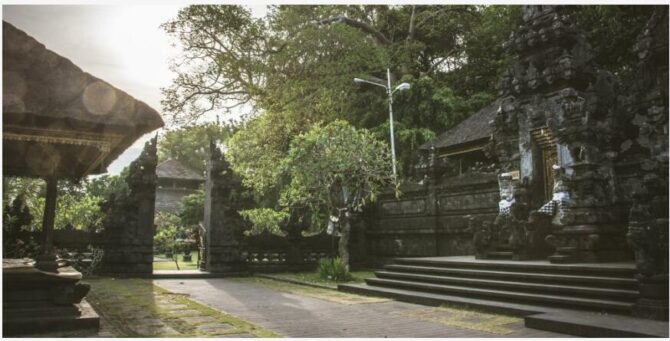 Goa Lawah Temple is built at the mouth of the cave. The temple is named “Bat Temple” or “Bat Cave” precisely because of its location.

Founded in the 11th century, the temple is one of Bali’s most important shrines. The founder of the temple was a priest named Mpu Kuturan, one of the messengers of Balinese Hinduism.

The main entrance to the bat cave is decorated with two large banana figs.

Inside are several small temples, some of which are as old as the temple complex itself. Pay special attention to the pictures depicting the dragon. The mythical Naga Basuki dragon is said to keep the world in balance.

Were you interested in Bali’s fascinating religious culture and uniquely stunning temples? Check out our Bali trips here! 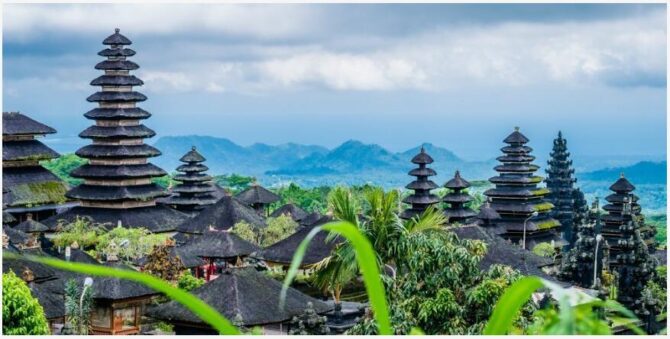